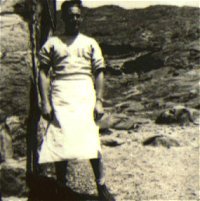 Mack was born in Boston, Massachusetts, April 20, 1924, the eldest son of Beatrice Starr and William D. Beal. He attended The Brooks School and Harvard University. He later trained at Columbia University’s Officer Candidate School and was selected for the Submarine Service seeing active duty in the South Pacific during World War II. In the mid 1940’s Mack moved to Jackson, N.H., a place he would call home for nearly seventy years.  It was there that he met his wife, Sally, and raised their four boys. Mack leaves a permanent mark in the town of Jackson through his years of dedication to the community and his determination to preserve the beauty of its surroundings.

Mack was one of the original founders of the Wildcat Ski Area in 1957. In 1959, he created Dundee Management Corporation in order to acquire and protect land in the Jackson area. Mack was also one of the founders of the White Mountain National Bank in 1963 as well as a former Fish and Game Warden for the state of New Hampshire, and a Life Trustee for the Mount Washington Observatory.

Mack worked as an artistic blacksmith, sculpting metal and stone artwork since the mid 1970’s.  He traveled extensively, visiting and learning from artist blacksmiths around the world.  A longtime member of ABANA, he was presented the Alex W. Bealer Award in 2005, the most significant and prestigious award given by ABANA for his impact and contribution to the field of blacksmithing.

An avid ham radio enthusiast (W1PNR), Mack could be found on the air daily – at all hours – for nearly 80 years.  He collected QSL cards from every country in the world. He last signed off the day before he died.

Mack was pre-deceased by his wife Sally and his youngest brother Danforth Beal.

Services will be held at the Jackson Community Church at 11:00 on Saturday, October 18, 2014 immediately followed by a reception at The Wentworth, 1 Carter Notch Road, Jackson.

In lieu of flowers, donations can be made in Mack’s name to the Mount Washington Observatory www.mountwashington.org/giving or to the ABANA Educational Endowment Trust www.abana.org/endowmenttrust.